One of these days I'll feel much better 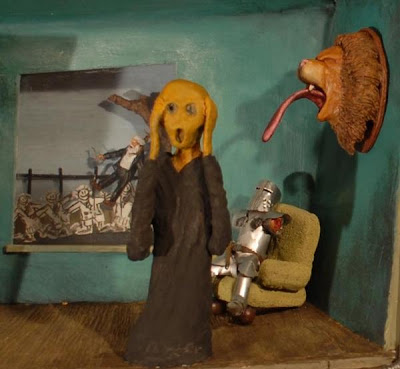 One of the little bonuses that came my way during this summer’s Green Man was the chance to catch up with a friend of mine I’ve not seen for a while.

Going under the obscure moniker of Men Diamler, Richard seems to have had a pretty busy year already, including his first CD “Sea Shanties for the Far Inland” and a Radio 6 session for Mark Riley. I fear his days of leaping across bar stools at Calmer may well be drawing to an end.

He’d not actually been booked to play Green Man, but with commendable spirit had come anyway to do a few impromptu performances on various tree stumps across the site. (This is pretty much what I’ve come to expect from Richard – this week I got an email from him saying he was near Manchester and would anyone like to book him to play at their house, for a meal and a bed…)

Having spent a pleasant hour or so catching up, a CD plopped on the mat a week or so later. It was, of course, the aforementioned “Sea Shanties..” and not having heard him play for a while I’d forgotten just how curious a song writer he is.

We have songs about despair, suicide, horses starving in terraced houses and rivers as black as puddings, phrased in (more or less) traditionally folksy ways, alongside others with a much pricklier, rawer feel to them.

He also has this remarkable, aggressive voice which completely belies his affable nature. At times he appears to be on the brink of hysteria on stage, and it’s a little discomforting, to be honest. I kinda hope this apparently uncontrolled colouring outside the lines is done to provoke a reaction from an audience, because otherwise I am a little concernedfor the man’s well being...

Here are three songs from the record, which will pretty much give you the long and the short of it:

Oh, Joy, When will you come?

I’ve written about Men before and posted a YouTube video of him at Slak, most of which featured an empty bar stool, as he pranced around the bar singing acapella on tables and chairs. Indeed, the first time I saw him play, he’d actually removed three strings from his guitar and filled it with stones to get some sort of wacky effect from it.

Well, these days, he appears to have calmed down a little and at least managed to stay on stage for the whole of this particular song, Black as a Cat in the Morning (also on Sea Shanties).