Who wants something real when you can have nothing? 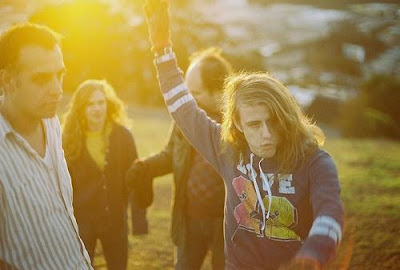 Well, with a whole host of tickets pinned literally or figuratively to my notice board and another triumphant evening in Bristol at the weekend, I’m on a bit of a roll…

Martin, Steve and I went to a new venue for me called the Cooler on Park Street to see much lauded and very cool San Francisco act, Girls, last Friday evening evening. Now, I don’t often get the chance to check out the newest bands that are setting keyboards a-flutter, first hand, so it was with something of a spring in my step that I found myself walking up the hill after a couple of refreshers in the pub.

The Cooler is another intimate venue in much the same style as Thekla, intimate downstairs space, poorly-lit with only the smallest of steps up onto the stage. I don’t seem to have been so close to the band for quite a while and I enjoyed it.

Girls came on looking as languid and foppish as I’d imagined the Wild beasts would last week, at least two of the members of the band sporting extravagant Hunky Dory-esque ringlets, and the singer wearing some sort of long, chunky-knit scarf. As Martin pointed out, it was reassuring to see a singer that you might actually be able to have in a fight.

Their set was appropriately nerdy, directed by reedy vocals and riding upon waves of feedback and twangy guitars, and showcasing most of the tracks from their album. It was great, as good as anything I’ve seen for a couple of years.

I do usually try to do a little research about the bands I’m writing about (although at times you could be forgiven for not noticing) but in this case I’m more vague than usual about even the most basic facts – I don’t even know anyone’s names. (Go on, you try googling “Girls”…)

Anyway, the sound at the Cooler was somewhat clearer and consequently I’ve managed to make some pretty good recordings of the evening. Again, there’s a couple of tracks I’m not as well informed of as I might be and have had to guess at names… But this is pretty much the whole evening, with a couple of tracks taken out from the middle.

Laura
Summertime
Ghostmouth
Lust for Life
I Take the Key in my Hand
Hellhole Ratrace / Morning Light
Love is Everything that You Need
Big Bad Mean Motherfucker
Posted by Sweeny at 4:51 PM