The Belle of the Ball 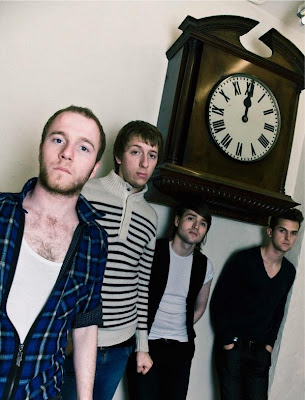 A great evening at Thekla with friends Martin and Steve on Saturday. Thekla is a place I’ve not been to before although the list of indie bands on their schedule has often made me feel that I should be there. It was indeed my debut and I was well impressed.

Some sort of cargo boat / ship thingie in its time, it’s now a seriously cool music venue with most of its endearingly industrial features – pipes, heaters, railings - still in evidence, hiding behind only the scantiest coat of black paint. On top of that there’s the lowest balcony above the main floor I think I’ve ever seen – I could have reached up and tickled the toes of the punters above me. Not a video screen in sight, I loved it.
The Wild Beasts
Anyway, the occasion of my maiden appearance was the visit of indie crooners the Wild Beasts, who were for a few moments in danger of falling foul of my being so absorbed by my surroundings. Thankfully, sanity prevailed and a storming set roused me from my (frankly embarrassing) reveries.

Having had their first record Limbo, Panto on my iRiver all week, and being mindful of the swooning falsettos in evidence there, I’d built up a picture of the Wild Beasts being a troupe of ambiguously dressed young fops smothered in eyeliner. In the event, this was not the case and they ran through a tight, fidgety and very danceable set that sped by.

I don’t pretend to understand these things, but a friend had told me that the sound was particularly good there and if I took said iRiver along I’d get some good recordings.
And so it proved it.

All the King’s Men

The first of these songs was their debut single from almost three years ago, which I think still sounds pretty fresh. And, with a satisfying symmetry which may lead you to the (quite wrong) conclusion that I actually plan all of this stuff, the second song is due to be released as their new single … wait for it… today.

There you go, impressive huh?
Posted by Sweeny at 8:09 PM