Scream blue murder 'cause you need something for the pain... 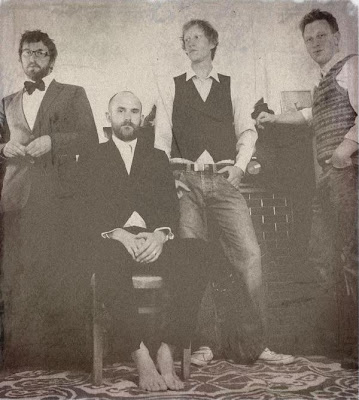 Dunno why this post has taken so long to put together (apart from the obvious, that is…)

One of the people that occasionally pops into this eminent organ is a feller who calls himself Devoted Hooligan, and has a damn good blog himself. He recently posted a link to an album called Fandom & Faction which featured local bands and singers. As he is based in , not a million miles from the old city, and as it featured a couple of artists I’ve seen (including dear old Men Diamler), I thought I’d give it a go. There’s some good stuff on it.

Including this band of groovy folkers...

Babel are five musicians from the area, who contribute a track called Pearl St Raga to Fandom & Faction. I see the word “Raga” and I think of Davy Graham straight away, a comparison which is over-flattering but gets you to the right area, if you know what I mean. It’s a track which has violins and a vaguely Indian feel to it, as you’d expect, but, driven on by a busy drummer, rhythm guitars and liberal amounts of clapping, it also really swings.

Pearl St Raga is taken from a mini album from 2007 and there is another album released since, called Crooked Timber , both of which are available from Emusic, here, and which I’ll download in the near future. The last release from them seems to be in 2008, but they’re still gigging, as this review from February of this year confirms. I imagine it would be a good evening…

In the meantime, here’s a rather nice video of “Made Your Bed” from YouTube.

There are a few other videos available too, including one for Pearl St Raga, which I can recommend.