You’re so in a hurry, you make it hard to breathe 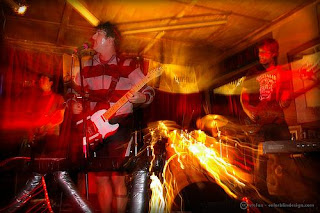 About a month ago I made a post about Tom Petty fans the Lonelyhearts, and reading through it now I realise I made no mention of the band’s label, Three Ring Records. I feel I owe them an apology, really, because their site (here) has got a good few downloads to snag, and it’s turning into a bit of a goldmine. There’s some great stuff there.

You hear references made to the eighties, these days, as if they were a great lost of decade, full of long-neglected gems. But to be honest, people, it wasn’t great. A bit of a train-wreck, as far as I’m concerned. But, having said that … there’s something of the eighties about San Francisco’s Music For Animals. And I rather like it.

I’ve listened to some of their tracks and I just can’t put my finger on who it is they remind me of (maybe Teardrop Explodes?), but I really like their punchy guitar hooks and driving rhythms.

As I’ve mentioned, they’re signed to Three Ring Records and have an album out last year. They also released an EP this September, and both releases are available here.

And if you’re not sure, there’s a load of tracks you can stream from their own site or from Last.FM (I’m only just catching up on this…). I’ve also dug up two free downloads for your listening pleasure…