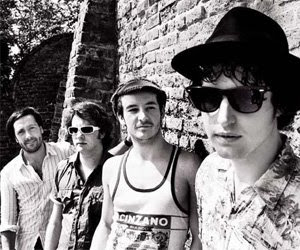 Do you go to gigs on your own?

Is it very sad?

I suspect the answer to those questions is “No” and “Yes” (in that order); but when faced with being unable to persuade any of your usually reliable cronies to come out, what do you do?

So, unable to convince anyone that a night out with the Holloways was worth a tenner, I thought “Bugger that, I’m going anyway!” and strode off to the Guild Hall, on my todd and only slightly self conscious. I like the Holloways. I bought their album last year and have enjoyed it regularly ever since, so I can’t really understand why they still seem pretty much unknown outside the web pages of trendy youth magazines. They write catchy, charming pop songs and there’s always a little more room for a band that can do that, I reckon…

Fortunately for my credibility and self respect, a friend of mine was amongst a rather disappointing turn out (although, bizarrely, one of the punters who did venture out was Dean Ryan). We spent the evening drinking and passing judgement on not one, not two but three fairly middling support bands, the only one of whom deserve a mention were Hereford’s, Rupert & the Robbers, who may be worth looking out for again.

(Reading through that again, I see that it implies that I spent the evening drinking with GRFC’s man at the helm, which is I’m afraid not true. Although I was tempted to ask him his opinion on music during rugby matches…)

Apart from local celebrity-spotting, it was turning into quite a long evening by the time the Holloways shambled on stage, and to be honest my mind was beginning to wander. Fortunately, (again) the Holloways were pretty good and came on looking determined to have a good time, despite the gaps on the floor. And so they did, playing most of the songs from So This Is Great Britain and a few that were new to me. They bounced around in fine fashion, engaged everyone with some energetic witty pop and managed to get a pretty clean sound (not something everyone manages at the Guild Hall).

On this occasion, I managed to avoid another Rifles-style fiasco and successfully recorded all of the set. And so I have a few selections for your pleasure: