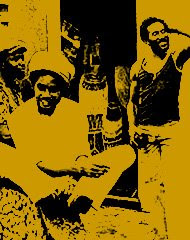 Clearly anyone with half a brain is a fan of the great and enigmatic Lee “Scratch” Perry. I do indeed have half a brain, so it follows…

A mere 72 years old, Scratch has now released three albums this year (and who’s to say there won’t be a Christmas release). I don’t yet have The Mighty Upsetter, but the other two (Repentance and Scratch Came, Scratch Saw, Scratch Conquered) are belters.

And I’ve just come across Eternal Thunder. A site lovingly put together by one Mick Sleeper which features, amongst other things, a great bunch of hour-long mixes, apparently sanctioned by the man himself and free to download. I’m not usually a fan of mixes (I’m trying to avoid saying “mash up”), but these ones really work and are a very funky way to meander away an hour or so…

Pay him a visit…