I'm a fifty year old man, what you gonna do about it? 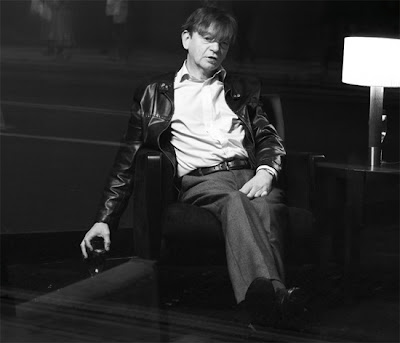 So on Monday I proudly made my Fall debut, going along to the Metropolis in Bristol in the company of old lags, Steve and Martin whose entire adult lives seem to have been punctuated (perhaps even shaped) by Fall gigs. A fair old history indeed, one I’ll admit to being a little envious of, but (I got the feeling) one that was matched over and over again by the dedicated souls that packed a fairly small venue.

Followers of this Blog will have found out that I’m a bit of a late-comer to the Fall; I’ve always been aware of their awkward spidery charm, and owned a couple of their records, but never quite “got” them. Until recently, that is with the rediscovery of This Nation’s Saving Grace, Grotesque and Bend Sinister, all records I’ve enjoyed this year.

So where do you go, faced with this history and your own status as a part-timer? The pub’s always a good place, I reckon, so having found that they weren’t due on stage until fairly late, we decamped across the road for a couple of drinks.

We did come back over for the support bands, but, as with a few gigs I’ve been to recently, they weren’t really worth watching. Time clicked on smartly, however, and it wasn’t long before the band came on and a slightly fragile looking Mark E Smith stumbled on stage. Someone at some point described the Fall’s sound as a glorious racket to me, and this was just how it was. A really tight band ploughed through a furious hour and a half of punchy noise, over which Smith ranted, screeched and occasionally crooned. All of the features of a Fall gig that I’d been assured would be present were indeed there – drunkenness, leering, amp twiddling, the mic being passed around the audience during “Blindness” and an amount of falling over.

I’d love to pretend I recognised all these songs and indentified them all immediately but I doubt I’d be fooling anyone. There’s a huge website called the Fall Online which is a good starter for anything Fall-related and perhaps not surprisingly a very active forum there, with people posting about lots of the gigs, including a whole thread on the Bristol gig here.

A jolly good time was had by all, and for once I managed to record the whole gig without talking over the recording or switching it off half way through. I imagine there will be people interested in this, so here’s the set in its boisterous entirety:

And two .rar files of the whole evening:
Part One
Part Two
Posted by Sweeny at 2:51 PM

full rar dead any chance of a re up?
Many thanks

Thanks for these files, it's a great recording.

I'd love to download the rar file, but get this message:

Think I've sorted this now... Let me know if it's still not right.

That's done the trick, thanks

Introduction and Bury is still the same, not in the rar files, but on your blog.

anyway - thanks for your nice recording!

"To the best of my knowledge, all mp3s are free and legal. "

You're having a laugh yeah?

I don't really have an answer to that one - you're right of course.

When I started the Blog I was just posting mp3s that bands were giving away, things have moved on a little since then, but I've not updated some of the settings for ages...

You've got me bang to rights, Guv.

Thanks much.I've known of them & heard a few tracks through the years,but recently I've been trying to hear more by them.

Thanks for adding to the collection

Great post. I was also at this gig and it was also my Fall début. My photos are here.

I'd love to hear the recording, but it gives a "bandwidth exceeded" error at the moment. I don't suppose there is any chance it could be re-uploaded else where is there?

Of course, it was a belter, wasn't it?

Will try and get onto it over the weekend...

First rule of IT is to do nothing and see if it fixes itself...

And lo and behold, it seems to have!

Fileden seems to be a little erratic to say the least, if anyone knows of a better way to store files so that they can eb streamed by Yahoo Media Player...

Got it! Fantastic. Thank you!