Tonight You Will be a Sleepwalker 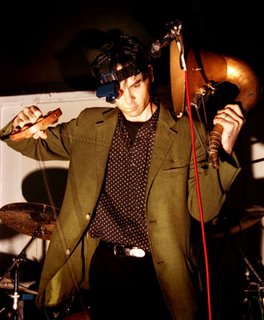 Not since the days of my youth have I seen a man wring a tune from a household appliance – and, you’ll have to take my word for it that I’m referring here to the great Roy Castle, rather than revealing any painful family secrets.

Friday night, however, brought it all flooding back…

This month’s Acoustica line up at the Guild Hall, included Bristol’s the Wraiths, Swindon’s Chantelle Pike and the afore-mentioned, rather wonderful Thomas Truax, who, if he’s to be believed, hails from Wowtown, USA.

The Wraiths were quite interesting and made a good fist of setting some of their favourite poems by Emily Dickinson, Christina Rosetti and Thomas Lovell Beddoes to a rather folky beat. The Wraiths are Mog who sang vocals and played electric guitar (very prettily) and Jon who played an acoustic guitar, sang and had what can only be described as a manic glare. Believe me, he was a little scary. I liked what they did and can recommend you see them if ever the chance presents itself.

Chantelle Pike was, well, earnest. I’ve seen her before (and maybe even dismissed her on these pages before, I can’t remember), but really she was pretty dull.

The reason I’d come, though, was sandwiched between these two acts and was as unconventional as the other two were traditional. In reality, Thomas Truax, comes from New York (rather than Wowtown), but it was immediately obvious that reality wasn’t going to play such a large part in his set this (or any other) evening. Dressed in a tan suit with ill-matching black & white brothel creepers, he already cut a pretty memorable figure but what really set him apart was the instruments he played. As well as playing a fairly conventional dobro resonator guitar, he accompanied himself with a variety of Heath Robinson-esque homemade instruments, which against all the odds seemed to work.

My favourite was the Hornicator, made from the horn of an old gramophone, which he had miked up and could sing into, but which also had strings he could pluck. It was well weird and I cannot do it justice. Watch this:

There were other instruments too, all with names, including a marvellous mechanical drum machine, made from pram wheels and aerials that gave a Tom Waits-style clunky drum pattern and which was called Sister Spinster, and the String-a-ling, which appeared to be made from the tubing from a tumble dryer...)

The songs, well, they were fairly eccentric too, and I’ll put a couple up here that are available on his website, where you can also find details of his two albums (both of which are available on Emusic), but really it was all about the performance. I spent the whole set slack-jawed and then grinning inanely – I loved him.

Escape from the Orphanage

I am about to snap my fingers and when I do this will be over…
Posted by Sweeny at 8:59 PM